Asian eyelid surgery will make an individual look more attractive, but only if there is balance between one’s eyes & face. A common feature among Asian patients is a wide face – an attribute that may not be facially harmonious with only an eyelid procedure. In these cases, facial reduction surgery should be coupled with eyelid surgery to achieve the desired level of beauty.

The ratio of one’s eyes’ width, height and distance play important factors in deciding on the appropriate surgery. For instance, since the distance between one’s eyes is typically greater than the width of an eye, upper eyelid surgery can help achieve more balance by increasing the width.

This Before & After comparison shows facial harmony at work, where the width of the patient’s face has been decreased to better complement the rest of her features. Here, the red and blue lines compare the ratio of an eye’s width to the distance between both eyes; an ideal ratio for such measurements is 1:1. In the Before photo, the ratio is 0.807; whereas in contrast, the ratio in the After photo is 0.925. The After image demonstrates a large improvement. The green & yellow lines represent the ratio between the crease of an eye to the distance from the crease to the eyebrow. In the Before photo, the patient does not yet have a crease, so the ratio doesn’t exist. In the After photo, there is a greater balance between the new crease and eyebrow.

These photos reflect a revision surgery where the ratio between the crease & eyebrow had is much larger than the ideal one; an ideal ratio is having the yellow line be less than 1/3 the length of the green line. This can be seen by comparing the size of the colored lines to each other in the Before & After photos.

2. Opting for a Taper or Parallel Crease

In most cases, the more natural, safer, and easier procedure is a taper crease since it will always be smaller than a parallel one and thus, safer. Here, the parallel crease creates a visual illusion where the patient’s eyes appear larger and the distance between the eyes seems to be smaller. In fact, nothing has actually changed in terms of actual measurements not only with regards to the eyes but also to their separation.

One should first make sure that ptosis actually exists.  It is common for people to mistake overhanging eyelid skin (i.e. pseudo ptosis) with sleepy eye condition (i.e. ptosis). If a patient is diagnosed with sleepy eyes, there are two main approaches to help improve them: anterior or posterior procedure.

The posterior approach gives a more predictable outcome and it doesn’t leave patients with visible scars. In contrast, the anterior procedure is applied to more severe ptosis. These are Before and After photos of an individual with ptosis and after it was treated, respectively. It may appear that this patient suffers from ptosis, when in fact the correct diagnosis is psuedo ptosis. The corrective operation in this case is simply removing redundant skin. This photo highlights what occurs when a patient undergoes upper eyelid surgery without correcting their ptosis first. In the Before picture, the creases are very shallow and barely appear. Also, the irises aren’t fully visible. The After picture shows a marked difference: the creases are a lot deeper and the irises are more visible and also show light refraction.

Underbrow Lift: this is a procedure for older patients with natural creases who wish to maintain the shapes of their eyes. The operation is also appropriate for older people who don’t have creases and their ability to see has somewhat diminished due to shrinking of their visual field. The Underbrow Lift is a fairly simple operation and the healing process typically takes two weeks. One important requirement is that eligible patients have enough distance between the eyebrow and upper eyelid. Brow Lift: this procedure is also for older patients whose brows have started to sag due to gravity. When the brow starts sagging, one’s facial expression may always appear angry due to the narrowing distance between the lid and the brow. While eyelid surgery will only increase the intensity of the facially apparent anger, Brow Lift surgery instead, can eliminate this seemingly unfriendly appearance by lifting the brow and reclaiming the lost separation. When the distance between the eye and brow is small (as shown by the green line), it is more ideal to increase the length between them (yellow line).

Most patients prefer non-cutting eyelid surgery for the following reasons: a) there is no scar; b) it has a quicker recovery time; c) it gives a more natural look; and d) it is reversible. This type of procedure has been done numerous times over many years and is quite common. The main con of this approach is that it cannot provide universal solutions to all areas of eyelid surgery, and thus cutting eyelid surgery is an equally viable alternative.

Non-cutting eyelid surgical procedure is best suited for: a) those younger than forty-five years old; b) those individuals with thinner eyelid skin; c) first time undergoing the operation; d) those who wish for a shallower crease; and e) those who have no or little sagging skin. These attributes are good indicators that a patient will achieve the highest potential results from a non-cutting eyelid surgery.

In contrast, cutting eyelid surgical procedures are best suited for a) those with thicker skin; b) people with over-hanging eyelid skin, usually found in more older patients; c) too much fat in the eye; d) those who are looking for a deeper crease; and e) patients who have had previous unsuccessful eyelid surgery. Since the skin is thinner here, the recommendation would be to not cut. 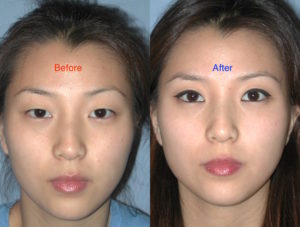 Here, the patient has met the above criteria for a successful cutting-type procedure.

Fill out the form Or call us

What Happens in a Consultation?

How May We Help?

* All indicated fields must be completed.
Please include non-medical questions and correspondence only.